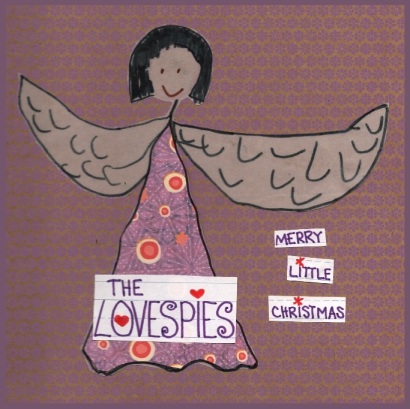 So eleven days ago, Julie had this crazy idea.

“Let’s make a Christmas album,” she tells me.

On its own, not so crazy an idea.

“Let’s record, mix and duplicate it in time for the Christmas Marketplace at our church in twelve days.”

Ok, she didn’t actually say this, but it was nonetheless implicitly implied.

So, we asked for help picking songs, which our friends readily supplied via social media, and began arranging them.  It was Tuesday, November 30.  We started recording on Wednesday, using a loaned vocal mic from Julie’s Uncle Dan (the illustrious Dan Penn).  We thought we’d have it until Saturday.  We got two songs recorded the first night, and then heard back from Uncle Dan.  He needed the mic back, pronto, so we wouldn’t be able to to any more recording with it, and my mics were not up for the task of producing beautiful vocal recordings.

Enter Santa’s helper #1:  Mike Demus.  He lets us immediately borrow one of his FANTASTIC mics, and we’re back in business.  I begin working around the clock, recording guitar, pre-mixing, arranging, engineering Julie’s amazing vocal sessions, and fitting in my usual teaching schedule.  Julie makes short work of the vocal parts with her wonderful vocal chords and adds some keyboard parts and valuable suggestions for the arrangements and levels, as well as suggesting adding the amazing vocal talents of Santa’s little helper #2:  guest vocalist Jonathan Riggs.  The two Lovespies furiously work through the weekend until Monday morning.

Enter Santa’s helper #3:  Javier Santiago.  With one day in Nashville from his grueling Christmas tour schedule with The Annie Moses Band, Javier takes the time to record drum tracks for several of the songs, considerably raising the professionalism level of our homegrown project.

And Santa’s helper #4, Chris Lowry was not far behind, taking time off his busy finals prep time to lay down some breathtaking viola sections, lifting the songs into the heavenly realms.  Working late into the night, The Lovespies finish up the main recording sessions.

Julie, meanwhile, is busy contacting the publishers of the non-public domain songs to secure the rights to record the songs, as well as shuttling players back and forth, caring for the littlest lovespy, and contacting local CD duplication places and print shops to see how much time will be needed for a rush job.

We had decided to go with ‘We Make Tapes’ over by Music Row, who also do CDs, DVDs, etc.  (I wonder if they still even DO tapes?)  They told us we could have it back on Friday if we could get them the master by Thursday at 3:00 p.m.  So that was our deadline.

Enter Santa’s helper #5:  Rob Still.  Rob Still, who is working against a deadline on his own CD project, graciously allows me to come by his home studio to listen through some different sets of speakers, and to give some GREAT advice on the mixes, all of which helped ice the cake on the production.

By 2:00 Thursday, the mixes are DONE!  (I notice a couple of things in the car on the drive to the duplicator, but oh well.)  I go up to the front desk, and get the bad news.

They can’t get it done by Friday.

They’ve had something go wrong with a previous order, and can’t do the job.

I call Julie.  The panic level starts to rise.

Enter Santa’s helpers #6 and #7:  Jeremy Hill and Dave Garvey.  Dave, a college friend of mine, works at a local publisher and, among other things, duplicates DVDs and CDs for their multimedia publications.  He had offered to dupe some CDs for the Lovespies when Julie and I had gone to Jeremy Hill’s wedding not long before.  Not having Dave’s number handy, I called Jeremy, who immediately provided the digits.  I called Dave, and, not only was Dave able to do it the next day, but he was able to do full color printing on the discs (they were going to be black thermal text only) AND he was able to do it for MUCH CHEAPER.  I can’t say how much.  It’s not fair to the rest of you how cheap.

So, with paper cutter and glue sticks in hand, the two Lovespies assembled the CDs, not only in time for the Christmas market on Sunday, but for the big church Christmas dinner on Friday!

So if you’d like your own copy of the Lovespies Christmas CD, click here to buy one!